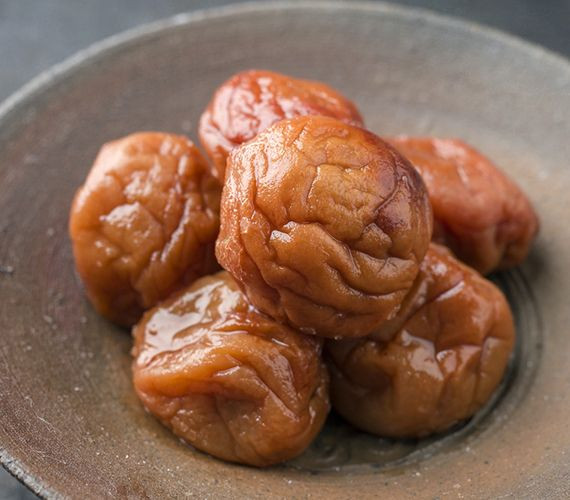 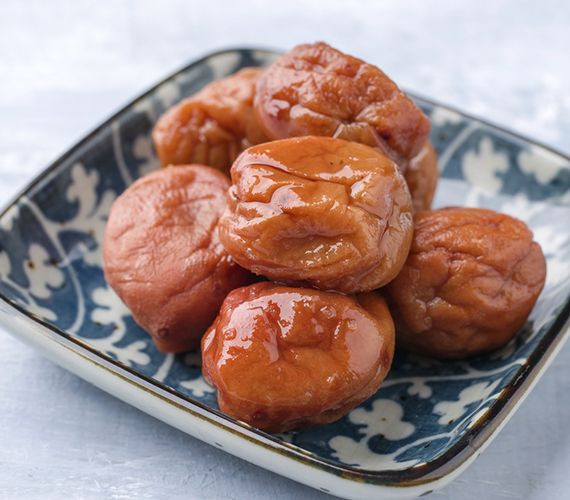 Tablets of umeboshi and jinenjo concentrate

Umeboshi is obtained from a fruit called ume, which is actually a variety of apricot, although is commonly considered as a plum. Ume fruits are picked, washed, salted, pickled and dyed with shiso leaves in a fermentation process that lasts for several weeks. During this time the levels of citric acid, one of the main elements that contains that is beneficial for health, are increased.


Also, apart from its citric acid contents, ume is also rich in vitamins and minerals, specially calcium, iron and phosphorus. Due to the abundance of these minerals, ume beats many other fruits.

History
Ume fruit has been part of the Japanese culture for centuries. Umeboshi were taken to Japan for the first time about 1,500 years ago, as a medicine made with ume fruit. There are records on the efficiency of umeboshi in Chinese medicine books that date back from 3,000 years ago. Its use became popular among priests and samurai warriors starting in the 12th century.

In the wars during the 15th and 16th centuries samurai warriors really appreciated umeboshi, and always carried it around to help them “revive”, even when they were on the verge of death. During this time umeboshi were still considered just as medicine. It was not until the 17th century that every family started producing their own umeboshi at home.

Umeboshi finally started to be eaten normally by families in the 19th century. During that time it was the custom to pour green tea over umeboshi and some kombu seaweed to drink it as a revitalizing tonic. Nowadays, umeboshi are considered as a traditional Japanese pickled food and are eaten as is or with rice.

Source of citric acid
The citric acid cycle is basic in our body to overcome fatigue. During the assimilation of nutrients (proteins, carbohydrates, fats and vitamins) the so-called fatigue physiological substances are produced (lactic acid, pyrodextrose or glucose.) If the body is not functioning correctly such substances are not fully eliminated and acidify blood, thus producing fatigue. Citric acid turns lactic acid into carbonic acid and water, which are easily eliminated. This is why eating one, citric acid-packed umeboshi a day helps overcome fatigue and slows down ageing. Citric acid is more abundant and easier to assimilate in ume fruit than in lemons.

Citric acid also helps to fix and absorb calcium. Pregnant women often crave something sour early in pregnancy because of an instinctive need for citric acid, which boosts the rate of calcium absorption and helps form the skeletal structure of the embryo.

Citric acid not only controls the secretion of gastric juice, but also helps prevent stomach ulcers and stimulate the appetite of weak or elderly people.

The organic acids in Umeboshi make the intestines temporarily acidic, to prevent the live bacteria from increasing in number. After being absorbed through the intestinal wall the acids become alkalized and enter the bloodstream to maintain alkalized

Organic acids contained by ume fruit are effective in treating constipation and diarrhea because they normalize the function of the intestines by sterilizing only low-density lipoprotein, leaving high-density lipoprotein in place.

Mimasa’s umeboshi-based products have been prepared following Japanese traditional systems, so they are fully guaranteed. They come in three ways:

• Umeboshi paste. Made with ume fruit.